In a new program, the Oregon State University Open Source Lab (OSL) partnered with Intel to give community college students an opportunity to get hands-on experience with open-source projects. This summer, four students interned for 10 weeks at the OSL, working on a variety of projects, including web development and systems engineering, to advance their skills and knowledge with open-source work and communities.

“This internship really has been a life-changing experience for me. I think it’s important to participate in more than just academics,” said Levi Willmeth from Linn-Benton Community College.

That was exactly what the program organizers were hoping students would get out of the internship. Additionally, the project sought to increase diversity in the OSL and Oregon State’s computer science programs.

“We decided to target the community colleges as they are historically more diverse, but largely underrepresented in these kinds of internships,” said Lance Albertson, the director of the Open Source Lab.

The internships offered the students experiences beyond what they could have at their home schools. Intern Hannah Solorzano from Chemeketa Community College had never worked with open source. In fact, she did not know what it was before the internship. Although her interest was in cybersecurity, her professor encouraged her to apply.

“The experience was very beneficial. I got to experiment with different languages, different platforms, and learned a lot of important tools,” Hannah said.

The interns also appreciated the experience with a collaborative workflow. Working in groups is not encouraged in their school courses, so the internship gave them a sneak peak at the practical execution of real-world projects and access to collective support and assistance from their coworkers.

This, however, created new challenges for the interns, including Levi who had to learn to adapt to a group of people working on the same section of code and adjust to integrated changes that conflicted with his own work. “Those little moments were where I learned a lot just from working with a team that I would never pick up on a school assignment,” he said.

The interns spent half their time working on the systems engineering team and the other half on developer team. The systems projects included internal coding projects for which the interns learned a variety of tools including Git and Chef and new coding languages like Ruby and Python. The developers project focused on redoing a website for a local high school. Both projects were works in progress and then interns were able to jump in with support from coworkers, mentors, and online documentation, all three of which they used in abundance to assist in their work.

“It was very difficult in the beginning, especially the first few days because of all the new tools,” said Elena Torrey, from Clackamas Community College. “I was worried I would never learn it all, but after the first couple of weeks it got easier.”

She was not the only one. Hannah said the first two weeks were the most difficult, and Levi joked he only accomplished about an hour’s worth of work in the first week. However, by constantly using the skills and tools they learned, they overcame the initial hurdles and eventually the work grew easier and more enjoyable.

One of the highlights of the internship was the trip to Prineville, Oregon to visit the Facebook data center.

“We learned a lot about their innovative cooling system, highly advanced custom- built servers, and data-storage back-ups,” Elena said. For Levi, the experience introduced him to the possibility of working at a data center as a future career.

The internship also encouraged the interns to continue their studies at a four- year university.

“I wasn’t going to go to Oregon State because of the cost, but after this internship, I saw how beautiful the campus was and the engineering program is really astounding. I’ve seen all that graduates from Oregon State have gone on to accomplish and that was really important to me, especially in this job environment,” said Cayleigh Thalmann, from Portland Community College.

Cayleigh plans to enroll in classes beginning Winter 2017. Both Levi and Hannah started classes in September and Elena has expressed an interest in taking advantage of Oregon State’s online post-baccalaureate program while living in Portland.

Albertson was pleased with the success of the internship program. “Long-term we could expand even more, even host the internship every term. We could also extend the opportunity to the Bend campus. I think it has the potential for growing and this is just the first step,” he said. 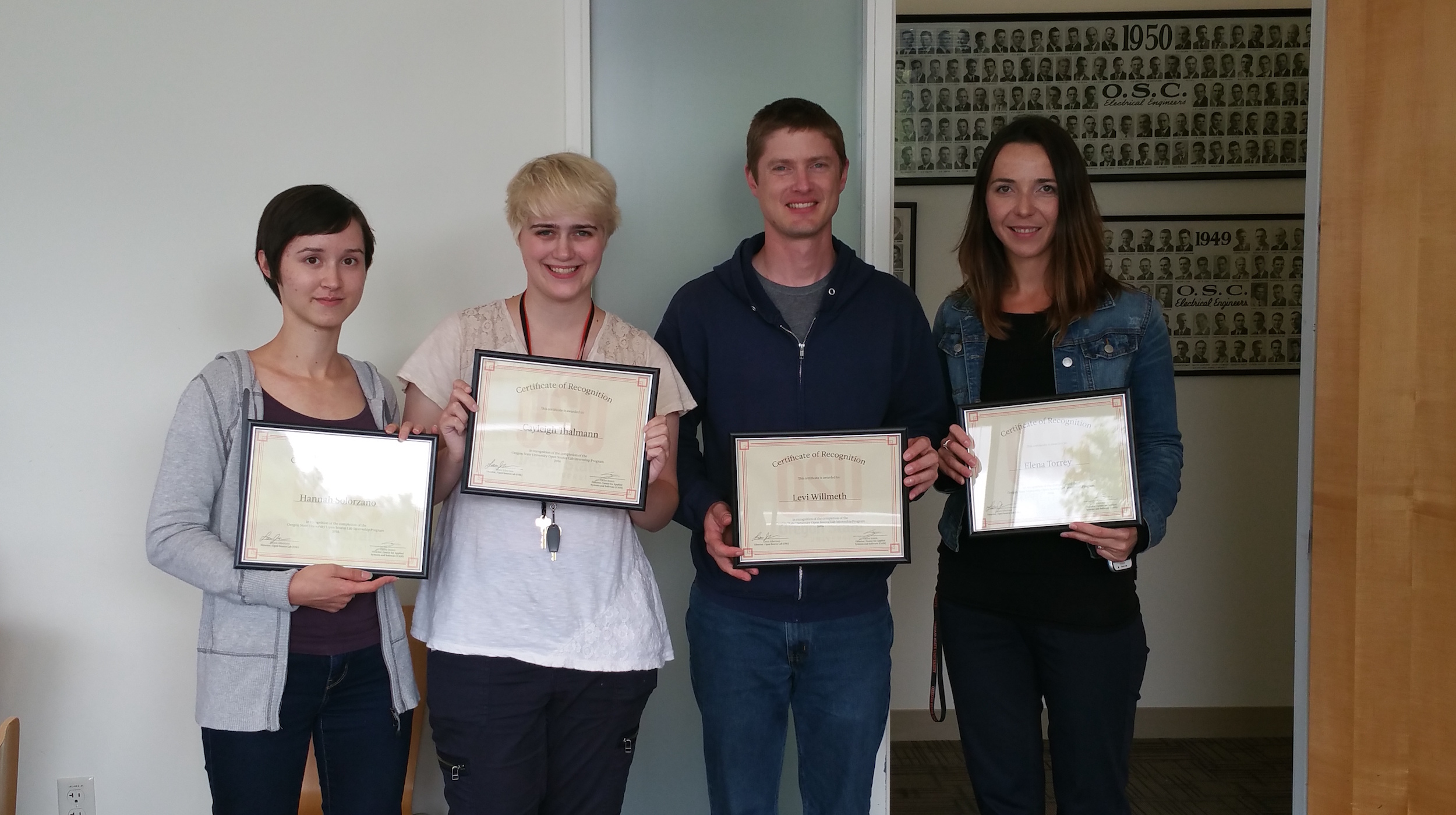